Clues are only in Bounty Hunt and Rifts are only in QuickPlay. The interaction between them is the same. You collect them and a region shrink happens. 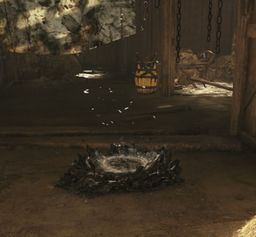 Clue is an anomaly found in the area where the beast resides. It resembles a pile of ash on the ground that smell of burnt flesh and sulfur. Hunters are able to track clues from distance with the use of dark vision. When found, they can 'open' it to relive the events that left an imprint on reality, and by doing so to narrow down the location of beast's lair. At least one clue is located in each compound on the map, but the exact location within the compound is randomly picked from the set of possible locations. In certain compounds two clues will spawn at the same time.

Note, that if you already found the beast's lair, or eliminated the area, the clues will not attract you, even if you haven't claimed them.

After reaching the clue, hunter may claim it to narrow down location of the lair. But the clue gives information even before claiming it. Untouched clue looks like a pile of ash, with sparks flying upwards. It means that you are most likely first one here. If any other hunter have already claimed the clue, the center will look like a hole in the ground, leading to a dark world, with the sparks still flowing up. That tells you that someone already have been here, so watch out for traps or ambushes. You yourself claiming the clue will also open the hole, but since the clue will no longer call to you, the sparks will be gone.

If an enemy team/player is nearby the clue, it will glow red and emit a different warning sound.

After claiming the clue part of the map is darkened to show where the monster's lair is NOT located. The hunt should continue in remaining part of the map. Also the compounds where the clue have been investigated are crossed-out. 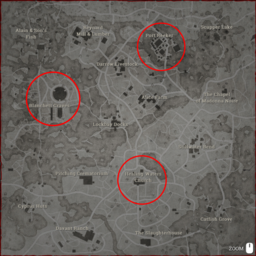 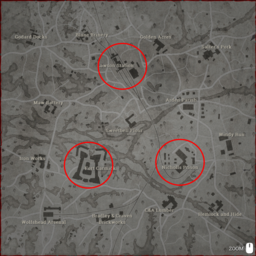 It may happen that the compound in which you investigated the clue will not be in the darkened area. If the second clue is located in this compound you may also claim it. There are 3 compounds containing 2 clues on each map:

Each hunt can target one or two bosses. The bounty tracker is shown in the top left corner of the screen. The tracker shows what monster is being hunted (or shows both), amount of clues gathered for given monster, monster health, banishing progress or extraction progress. 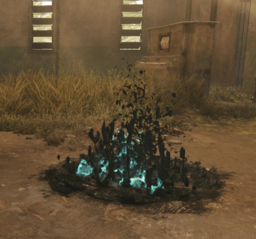 After reaching the rift, hunter may close, which will also disable some of the other rifts. Hunter will be able to distinguish those unactive rifts and will mark them on the map. If an enemy player is nearby the rift, it will glow red and emit a different warning sound.

Closing the rift allows hunter to siphon some of its energy. After closing four of them, hunter gains access to even larger energy pool called Wellspring. Energy of Wellspring will clean hunter's soul of his damnation over time, but will also inform other damned hunters of his whereabouts. To save themselves they will have to take the Wellspring's energy by force, as only one hunter may be saved. If the wellspring's energy is drained, everyone who is not connected to Wellspring will be killed and their soul sent to hell.

Hunter connected to wellspring cannot leave the vicinity of where the connection were established (shown as red circle on the map), as it will cause him harm and, consequenty death without salvation.

It may happen that the compound in which you have closed rift will not be in the darkened area. If the second rift is located in this compound you may also close it. There are 3 compounds containing 2 clues in Stillwater Bayou and in Lawson Delta: