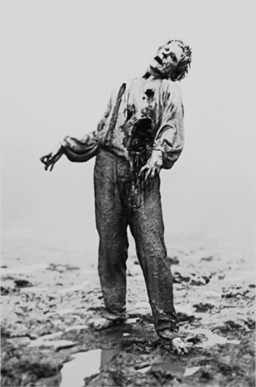 Entry from Book of Monsters. The Grunt is a standard and easy to take down enemy in Hunt: Showdown 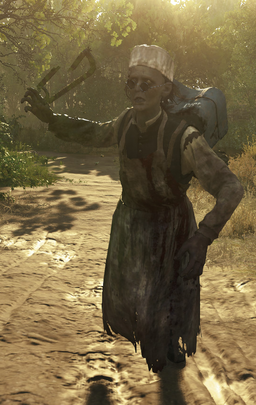 Researcher's insight into the Grunt

It is quite difficult to perform any typological analysis of this Louisiana incident. I'm starting to think these events may have been the beginning of the zombie stories we have today. It certainly matches the pattern: Some kind of deadly infection hits a settlement, almost wipes out the whole population, and then the dead rise from their graves in order to feast on the living. Though this is the only zombie story I've heard where the zombies take up weapons - torches and blades in most cases - to wield against the living. The old adage holds: truth is always far stranger than fiction.

It seems like the hunters of this era were simply calling them Grunts. There are conflicting reports of course, but the material I have found so far appears to be talking about what's probably a slow-moving and mostly human creature, possibly the victim of a viral infection, or controlled by some kind of greater spirit or Loa.

While at times I seem to be grasping at straws to identify some of the more specialized monsters in the source texts, Grunts are ubiquitous, to say the least. Of particular value, an autopsy performed and recovered almost in full from the journal of Dr. Reinhard Winkler that I've included in the archive.

According to reports, you could quickly dispatch a Grunt quickly with a well-placed head shot. I still wouldn't want to meet one in the dark. And certainly not in numbers.

It took Father Nico and his children six hours to draw the wards. In the end, he fell asleep, exhausted from his ordeal. Only two of the boys died this time. The rain did not help. Yes, it's a bit rainy today. I never liked rain. It underlines the smell of urine. It just feels wrong, unhygienic. It washes away the clean, allowing the dirt to prevail.

Can't smell the rain today, though. The stench in the laboratory is still unbearable. This is certainly not decomposition. Decomposition is natural. Nasty but natural. After all, just as Carnot postulates, everything rots. Doesn't it?

No, this is something darker, something deeper, perhaps something unnatural and as wrong as the smell of dog piss after rain...

Not the smell of death.

It's the smell of life which should not be.

It stopped twitching at dawn. Not sure if it's dead. Not sure if the word even applies. The creature has the apperance of a perfectly normal, if decomposed, human being. Yet inside, i suspect, there is some kind of darkness, a hint of something, dare I say, satanic.

Father Nico broke the silence, assuring me that the darkness is unable to breach the wards now, rendering this specimen inert.

Apparent cause of death

Multiple bullet wounds in the cranium I'd say under normal circumstances. If I can ignore its missing larynx.Its throat looks chewed off. Fang marks of a beast of some sort. Something we haven't seen so far?

I have difficulty finding a suitable classification for these specimen. Phillippeaux calls them Zonbi, an older Haitian word for human beings controlled via magic. Although fairly accurate, I believe it's too narrow of a defintion.

The wards may be doing little more than securing Father Nico's peace of mind, truth be told. I've more faith in bullets having rendered this thing inert, than his ritual.

But Black's notes refer to them as a "vessel," an empty receptacle for whichever spirit decides to invade. Or perhaps, just a vessel for the plague. This too feels accurate so far. Need to investigate more...

Can it be just four days since my last entry? So much lost in such a short space of time.

I'm coming around to Father Nico's interpretation of this thing. There is comfort in faith. Believing, again.

Dissection still proving to be difficult. Tissue collapses and disintegrates under the scalpel. With great difficulty, I managed to reach the vital organs. It looks fascinating, to say the least...

There is no significant anatomical change as far as I can tell. It is very likely these thing are still fundamentally human. Torn muscle fiber all around. Suggests resistance to motor s- [there was a brown stain here. his hand writing gets progressively worse.] As if the body itself is controlled by some invisible consciousness against its will ['against its will' has been struck through once].

It's just a theory, but maybe this thing ['thing' has also been crossed out] person is still alive inside. Despite the state of decomposition, I believe there might be an actual person trapped in this body. If this indeed is the case, it must feel like a personal hell. Witnessing yourself as a monster.Of course, if that's the case the obvious question is what is controlling these grunts.

Perhaps, the belief that there is something controlling these people is what's given me comfort.

That there is a meaning behind all this death, or, that there is indeed something greater.

Sun's up today. The stench is unbearable. Lots of flies. Labratory surrounded by no less than 10 of the grunts. They keep hurling themselves against the wards. Against the walls. I signaled William. Hope he makes it in time.

Opened the rib cage today. Saw it was buzzing ['buzzing' is again crossed out] moving.

All the internal organs, with the curious exception of the heart, seem to be at least structurally intact.

Something wrong with the heart. Seems deformed ['deformed' is scribbled through] spherical in form. Pulsing, but not pumping for lack of a better term. Even in death, it keeps on pulsing in a dark, sticky fluid. I had to check the wards to see if they are intact, fearing that dark presence is making it move again. But no. This is some kind of primal reflex. Leads me to think it's still alive. Or dead.

I postulate that the fluid inside the heart itself may be causing the disease. Or vice versa. Too tired. Need sleep. Need to focus. Need more time.

A breakthrough. It turns out the heart is more of a nest!!

Father Nico has been too embattled to share my delight in the discovery. It seems that the loss of the little ones has worn his resolve.

If only I could get inside his head, direct him to the matter at hand.

The heart seems to be pumping some sort of nutritional fluid into the veins, which in return house tiny larvae. Is it pumping insects? Need samples.

Something else I haven't caught before. The circulatory system now seems venated. Like the wings of a horse fly. I'm quite sure this was not the case before. The specimen appears to be changing, evolving. How did I miss these changes? All that venation and there is no blood. Is the black liquid its blood? For what purpose? I don't know. ['it whispers' has been scratched out furiously] I am exhausted. Eyes burning. Head buzzing. Where in the nine hells is William?

And now the specimen seems to have developed a new postmortem reflex. Semi-regular spasms; It is as if the chest is going to explode. The grunts are almost in.