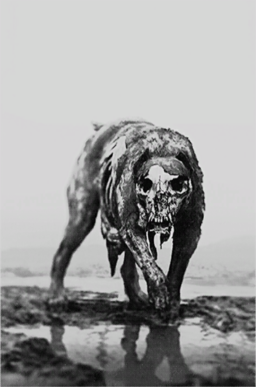 Nasty hounds that maul their targets, make sure to shoot them in the head and be careful when you're fighting a pack.

Hellhound
Researcher's insight into the Hellhound

First the facts: the so-called "Hellhounds" were pack animals (most often seen traveling in groups of between two and four), aggressive, and fast. These hounds would work together to take down a target, and while they do not appear to have any kind of special defenses, they did not have any particular vulnerabilities either.

Now, I know I have said in the past that I find certain aspects of this case unbelivable. And yet, you must know that i do believe. If I did not, I would not be keeping this journal. But the Hellhound, omnipreset in myth and legend to the point of banality, strikes me as the one creature among them that is more likely a story than a reality. People have always feared dogs, even as they began to domesticate them and live side by side. Were these specimens really supernatural creatures, as reported? Or just highly aggressive, feral dogs, made all the nastier when the plague made food - and human kindness - scarce?

Scognamiglio believed they were Italian mastiffs, possessed by the corruption. Othersources describe them as "undead dogs," but we must consider their reliability. Braggarts exaggerate. Reports of viciously collared and muzzled hounds indicate that there was in fact an infection, but whether it was of supernatural (corruption) or scientific (rabies) origins, I cannot say, as the sources on this point, to my mind, are inconclusive at best.

Wolves are naturally indigenous to the Americas, and therefore also the domesticated hound. In Antoine-Simon Le Page du Pratz's Historie de la Louisiane, he remarks how the indigenous Natchez people used domesticated dogs a great deal, commonly as beasts of burden to transport trade goods. As with all things, there is a darker past to be discovered. Le Page du PRatz reports on the day he heard of the massacre at the Post des Natchez. After more than a decade of peaceful coexistence, the French commandant had demanded land from the Natchez. In retaliation, "les Français des Natchez ont été tués par les chiens de Sauvages," the French were killed by the Savage's dogs.

Albeit, my French is not what it was, and my ability to translate may be marred by the years. But clearly here, these unleashed dogs savagely massacred the colonists. I can only imagine the braying hounds of hell bearing down on the settlers. Out in the bayou must still live the ancestors of such dogs, when they come back with stories of Hellhounds roaming the woods in vicious packs.

Cerberus comes to mind, the quintessential mythological hound of the underworld. In a cursory examination of my library, I produced a list too lengthy to enumerate here. In overview, the majority of myths emerging across the world depict dogs as the loyal friends and helpers of men, particularly those of Native Americans, always our first port of call.

Thus the distinction must be made between these stories, and the legend of the Hellhound. The omen of death. This emerges all across the Albion isle. From Northern England, the monstrous Barghest and Gytrash. From the Eastern coastline, the redeyed Black Shuck. The south, the Yeth Hound. The Isle of Man, the Moddey Dhoo. Wales, The Gwyllgi and Cŵn Annwn. The list goes on. Why so many from Britain? Perhaps, lurking in the colonial mindset, is a latent terror of a servant turning against their master, one which America has surely inherited.

Lots of folks hunt as a team. I don't. Part of the reason is that I simply don't trust people. I can't. Not after. Well, nevermind.

I don't need a partner. Never did. Tried it. Didn't work. Didn't last.

Now I have Bunny. Bunny is a German Shepard, huge ears. You'd think that naming a dog Bunny would be insulting, but Bunny's not offended. Me and Bunny, we have an agreement. Life is too short. No need to take everything seriously. When things go to hell it's usually because too many people are acting too serious. I don't like serious people. Stay laughing, stay alive. It's hard to keep making jokes in the dark, but Bunny helps. Bunny won't leave me.

Bunny knows I don't really think he's a rabbit. It's just my way of poking fun at him. In return, he likes to wake me up by biting my ear.

Probably I'm being sentimental. Probably our relationship is purely professional. It's never a good idea to give too much of your trust away. Friends betray each other eventually.Sometimes the trophy turns out to be a set of dry bones. Now who's the serious one?

Never left my side since he was a puppy, and now Bunny is gone.

He's not stupid. He knows where his next meal is coming from. He wouldn't leave on purpose. Back before, I would have thought a gator had gotten him. Happened all the time. But the swamps have been silent. There aren't any gators anymore.

What I don't like is indecision. I want purpose and clarity and decision and action. Bunny never stopped to think. Bunny always acted on instinct. We could all learn something from Bunny. Good ole dog. I miss him I'm not ashamed to say.

Now I know I said I don't go in for trust, but I realized this morning its not true. I trust my six-shooter. There's nothing a well-placed shot won't fell. I could shoot the wings off a fly if needs must.

Could shoot the memories out of a poor old man lost his dog.

A FAMOUS MADSTONE. The fame of the madstone owned by J.J. Anderson of New Orleans, has spread abroad. A year or so ago a colored man was terribly lacerated by the fangs of a mad dog in Mississippi. He was successfully treated, and since then some seven or eight people have applied the madstone. Another victim, T. Parton, travelled from Memphis, Tenn., to test the madstone. Applied, it continued to absorb the virus for fully two hours before it refused to adhere any longer.

WILD DOGS IN THE SOUTH. In the bayou country, described by most as a wilderness of forest, wetland, and brushwood, a race of wild dogs have established themselves. Their numbers are increasing rapidly, fears are entertained that these animals will become troublesome. When the Southern Pacific Railway was under construction the camps of workmen were frequently moved, and the dogs were left behind. Like wolves and foxes, they have found ways of sustaining themselves.

VITAL HOUND CARE. If he is infected by rabies, signs appear in six to ten days. He will be restless, impatient, often getting up only to lie down again, and constantly licking or scratching some particular part of his anatomy. He will be irritable and inclined to dash at other animals, and he will sometimes snap. He will vainly endeavor to rid himself of a thick, ropey mucous discharge from his mouth and throat. If he can, he will probably stray away from home. Ferocious dogs may attack any living object in sight.

GONE TO THE DOGS. Eliza P. H. Nicholson published in his paper, our friendly rival, on an important matter, regarding his SPCA refuge, some five miles south of New Orleans. There are saved many poor dogs and horses that have experienced cruelty. This past Sunday, a rogue employee, hysterical and a carpet-bagger by all accounts, was apprehended having opened the barn doors. While justice will be taken swiftly, estimated one hundred dogs and horses escaped.

I hoped Bunny would come back to me but not like this. Couldn't say how long he'd been dead. Body was already stiff as a board. Was terrible to see him like that, and the way he was all ripped up, it looked like he'd been in more than one fight. Bites and cuts all over. But knowing my Bunny, whoever he was fighting with out there looks worse.

Man who brought me the body said he'd suspected rabies. Read all about it in the paper. Said Bunny had attacked his Retriever, already looking like hell's mutton and with that thick mucous about the mouth the rabid ones are said to get. He'd bitten up the Retriever fierce, but then, he said, he was very sorry, but he'd had to shoot my Bunny. He had children about, he said. Livestock. Well he said those words and before I could even think I had my knife at his throat, ready to kill him too, with my bare hands if I had to. Practically foaming at the mouth myself.

Well, I calmed myself. I didn't kill the man, and he bought me a bottle by way of an apology. Can't seem to quench my thirst though, and my throat hurts too, but well, that's probably from the mourning. Can't bear to just sit and stare into the fire any more. Thought I saw a hound rushing at the fire, and I drew and shot. Just shooting at the air though, no hound here at all.