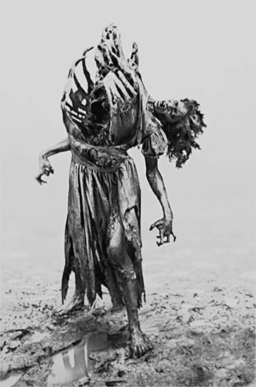 Scognamillio thinks it feels like an evolution of a simple form; in this case a person possessed by some kind of insect spirit eventually turning the body into a hive itself. Harold Black's book includes pieces of a hunter's diary describing this thing.

Hive Researcher's insight into the Hive
Undated
Of the ten creatures I have researched thus far, it is the Hive who haunts my dreams. Though she appears to have been classified alongside the other Grunts, she was a far more dangerous creature, setting a swarm of insects upon any human in range until their bodies were punctured and swollen and heaving with their vile poison. Only her own death - the death of their host, the Hive Mother - stopped their persistent attacks. Though she could be safely killed from afar with a shot to the head, the positioning of her body made the task difficult even for the best marksmen. Blunt damage could harm her, though little else, and in the time it might have taken to try, her beastly swarms would have already stung their prey into flight or submission.

Looking at the bigger picture, I am attempting to understand the purpose each form served in the eye of their creator. The documents I have collected - in particular the interviews with Ada Shell - have led me to hypothesize that the Hive's function was both to host and to disseminate the malady. Convert or kill at a distance; perpetuate the "race." I am reminded of the writings of Trask, active at that time, who was convinced that a woman's divine mission was the "perpetuation of the race" through continuous breeding. The seed of this idea - twisted though it became - was personified in the first Hive on record, as you will see.

Mama always said not to let my mouth hang open, or a spider'd crawl in. Didn't believe her at the time, but after she went, I never forgot it. I was 13 the day it happened. I know because it was my birthday. Nothing to celebrate. Barely any food to speak of. And Mama so sad. Mama'd a babe that'd died that same year, and Papa'd followed it up to Heaven. Her life was hard and getting harder. Seven kids living, four under the ground, and nobody to help keep us in mutton.

We had one room and a leaky roof, all of us sleeping where we could. No happy memories there. Only found out I was pregnant after we'd all been brought in to the asylum. Doctor told me. I told him well then Praise Jesus, cause I'm the Virgin Mary, and he shook his head. But I wasn't lying. I had never had relations. When they cut the baby out of me, I wasn't supposed to see, but I did. It was strange, and hard, and dead, like a piece of old, chewed-up wood. Don't have any living children.

Oh, yes sir, my pardon, what happened that day was what you were asking about, I got off track. I don't like to remember it, but I'll try to tell it quick, get it all out in one go and be done with it.

Mama'd been quiet all day, sadder than usual. It was July. Like I said before, I know for sure as it was my birthday. The mosquitoes and the flies were fierce. We didn't have glass on the windows, not even paper. I was watching her and she was fanning the flies off and chewing on her finger, nervous habit of hers, and she's chewing and I'm watching and a fly just crawls up her finger and into her mouth and she doesn't do a thing. Seemed everything happened quick after that. More flies and other things beside. The room was full of them. Like a plague of locusts, straight out the Bible.

I couldn't take a breath without getting them in my mouth. I saw more and more and then more going into Mama's, and then hear ears, and her just standing there, not moving, fanning and chewing and fanning.

The noise was terrible, the buzzing loud as a saw, and the others just screaming and wailing, and I closed my eyes and covered my ears. But the cracking sound that followed that was loud as if the roof was coming down. I opened my eyes and <a,a had kind of...folded in half and...opened...and well really it weren't my Mama standing there no more but this thing, this nest thing like the wasps build out the shed between her rib cage, her rib cage! I could see her rib cage! And she-it. It was screaming and the other children were screaming too still, especially Edward and Henry, they took it the worst I think, and I don't remember much of what happened after that is what I'm telling you. Ut's why I'm trying to find my siblings, sir, though its been a few years. It's why I wanted to join your little shooting club.

Yes, I understand. Go ahead. The files are all there. My notes won't be much use to you I should tell you, I'm no good at spelling. Woman who worked there helped me get those papers, read them to me 'til I had them memorized. I don't need them anymore.

Henry Shell - Restless, in constant motion. Multiple lacerations on the left side of the face. Will not speak.

Grace Shell - Clings to intake nurse. Will not speak but makes shrill noises, as an infant crying. Attempted to suckle though clearly long past the age of weaning. Hair and face caked in blood and possibly feces. Agitated. Refused bath. Given sedative.

Samuel Shell - Treated for three broken fingers, broken nose. Appears calm. Plays with blocks. When questioned, says the flies flew away with his Mama, but that God would fly with her to Heaven and keep her safe until he could bring her back to him. Says the flies "are the wings on Heaven's angels." Reacts violently to the presence of insects.

Well, thanks to you, sir, I found Samuel after our last conversation. Still in the asylum. Still playing with his blocks. He fixated on those blocks when we were first taken in. Never stopped I guess. Talks normal enough, for a five year old. But he's a young man now. I hope they give him comfort. He barely acknowledged me, though he seemed to know who I was. Asked if I'd brought his Mama along with me, and wouldn't speak again when I told him I hadn't. Just humming to himself. Nurse told me he still doesn't much like bugs.

I thought maybe all of us were infected. We were all living in that house. All eating the same food and breathing whatever was in that air. I thought it would happen to every one of us, person for person. I think that's what they removed from my belly. Some kind of larvae gone wrong. Baby didn't come and didn't come and...well I told you about what they cut out of me.

Edward and Henry went violent. They wouldn't speak. Being their sister I always thought they were more than a bit thick, but after, it wasn't just my teasing. They couldn't speak right and there was something strange about their eyes. Only seemed to remember how to use their fists and wanted to use them on anything that moved. Had to be restrained. That was horrible to see. I hate the thought of being tied to a bed. They must have too, the way they carried on, but they had attacked a doctor and seemed hell bent on hurting themselves too. The doctor must have given them something to calm their nerves, for it was only that first night I heard them. Problem with lice, too, I heard a doctor saying. But I was transferred soon after. Never heard another word, but like you said, seems they are in another asylum, still strapped to some bed. No visitors allowed. Danger to the public. My God if Mama could see us now.

Wasn't more than a headstone to find of Grace. Sweet baby Grace. [begins cryingJl'll be needing that constitutional now, sir.

The day she turned I didn't see much. I told you before. Just closed my eyes and pressed my body hard into the corner of the room. I didn't want to see or hear. I didn't care much if I lived or died. Guess that's why I didn't run. Didn't see a point to living anymore if something like that could happen to my Mama. Just froze up. I'd guess it was Viola and Lily that got her out of the house, though like I said, I had my eyes pressed hard closed. They must have run and she followed and...well I could hear what happened, even if I didn't see it with my own eyes, and I did see what was left of the bodies. Viola got a bit farther than Lily, almost to the treeline. I don't know if it would have helped if she had made it to the woods. Both of their bodies were swollen from the bites. Hundreds and hundreds of bites. All red and swollen with the poison.

The first time I saw her in the swamps was my first real look at her since the Change. I didn't expect, well, it was like looking at my own face in the mirror. Never knew how much we shared a resemblance. Guess I kind of grew into it. Always thought Viola'd taken more after her, and me out of the Changeling's basket.

I heard the screaming first, recognized it in an instant, and the sound brought me right back to that room with her screams and theirs. Then across the field I saw her, bent over all wrong, twisted and shambling and with that big paper nest sitting between her own ribs. Her own body turned against her. I don't know if my Mama is in there anymore. Her mind, I mean. Her soul. What happens to your soul when you become, that? I've heard there are more than one now, but they all look like my Mama. They all look just like me.

It was all I could do to force myself to shoot. I did, but I hesitated, and my hands were shaking and I missed and, well, that's how I lost the arm, but you know all that already. But I'm going back out. Your training won't go to waste. I'll get my Mama the rest she deserves.