How to Play Guide for Hunt: Showdown

This page will serve as a basic how to play guide for Hunt: Showdown. While there is very little information available at this time, we urge you to check back often, as new information is being added all the time! Feel free to edit this guide with any tips, tricks, and suggestions.

Every match is unique, varying depending on factors such as difficulty, time of day, boss type, and Hunter level. Up to ten players, solo or in pairs, compete for the prize.

Sound is a Key Part of the Game

More so than most games, Hunt: Showdown relies on sound for your survival. There are all kinds of traps that make noise and can draw the attention of both other players, and creatures. Gun fire, running through water and even walking along wooden planks can also create noise.

It's important while playing to be aware of this so that you don't create too much sound, but also are actively listening for it. Hear gunshots in the distance? Slow your approach so you don't run face first into someone's rifle. Hear dogs barking or zombies groaning? Another player is likely nearby and disturbing the peace. It's a key part of the game, so when you play, ensure that you can hear the game clearly, and are always mindful of what sounds you're making.

This is a PvEvP Game

Part of what makes Hunt: Showdown an interesting game is the conflict between handling the monsters and the other hunters. Every where you go, you are bound to run into Grunts, Hives, Meathead's, and other enemies.

When you get into a fight with other people, use this to your advantage. Are there a group of Grunts nearby? Lure them towards it. See a red barrel around a corner? Run past it and hope they follow. Even the simple act of keeping them distracted while a grunt walks up on them can be the difference between a quick win or a long fought loss.

It can be easy to grab a hunter, pick a contract and start slaying some grunts, but this can lead to near impossible to win the bounty. Why's that?

Certain contract monsters have different strengths and weaknesses, so choose your weapons, tools, and consumables wisely. For instance, the Butcher is weaker to shotguns than other types, while the Spider will take damage from any gun but is incredibly fast. This means that if you don't have shotguns, but you're trying to take down the Butcher, you'll be in for a much tougher fight. Before selecting which contract you want to kill, consider your items and how easy it will be for you to beat them! 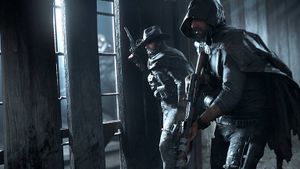 Killing a contract monster is only 1/3 of the task. Once it's dead, you need to Banish it to Hell. This process takes several minutes and while it happens a burning effect will mark your location on the map to other players so that all players in the match are alerted that it's begun.

You do not need to stay near the corpse during the ritual—it will continue even if you’re not in the area and cannot be paused or canceled. But you need to protect the area so that you can claim the bounty once it appears. During this time, you will want to stay in a safe area and move only when necessary so that you can hear your surroundings. If you're in a two-player hunt, one of you should stay near the banishing creature while the other acts as a lookout, as the other players will surely be in a rush to find you.

When the banishing is complete, two bounty tokens will appear in place of the monster’s corpse. Collect them (each Hunter can only collect one) and prepare yourself for the showdown, as other surviving players flock to your location in hopes of stealing the prize. Tread carefully, the Bounty Tokens will continue to act as a spirit anchors. This anchor manifests itself in the form of flashes of lightning visible in Dark Sight. This means the location of a Hunter carrying a Bounty Token is visible to other Hunters.

Now you can either head directly for an extraction point in order to exit the map and collect your bounty or, if there are two contract monsters, risk going after the second target monster on the map.