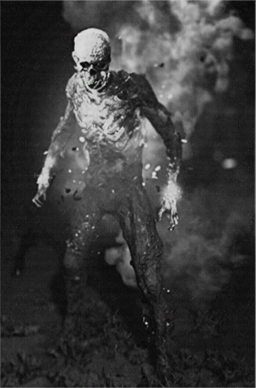 Entry from Book of Monsters.
Immolator is a tormented soul that remains dormant until a Hunter gets close, charges at nearby movement, bursts into flames when shot, and/or makes your life hell in various other ways.

Roaming Immolators start in a dormant state. After being aggro'ed, they will attack just as other regular enemies. However, when piercing damage is dealt (knife heavy attack, bullet impact) they will explode, dealing area damage and inflicting the burning condition. The explosion will set the Immolator ablaze.

In this state the Immolator moves faster. As he charges, he will leave a fire trail that can set on fire everyone that passes through it. If he can't reach his attacker, he may look for other closer targets such as other Hunters or barrels.

After ignition, if an Immolator is not killed it will burn out and die after 30 seconds

The Immolator seems to be the most tormented of them all. The smallest movement sends him into a rage, attacking chaotically, and when shot he burns even hotter and charges like an angry bull. He is, of course, extinguished in water (and can be fatally consumed by his own internal flames), but otherwise, represents the most intelligent example I have seen. The beast can actually open doors!

I have noticed certain Biblical parallels in the story that - I believe -describes the very first occurrence. Did the religious factions have it right after all? I wonder. We both assumed that the folklore was just that: lore, scary bedtime stories. Another author's futile attempt to force linear, comprehensible human meaning onto an inexplicable event. What if this time, they got it right?

The beatings that led to Jeremy's transformation must have taken place in a volatile location, but it is unlikely that any of the perpetrators were aware of that. One witness survived and is listed as having been admitted to the asylum, diagnosed with religious mania, and terrified of hellfires.

I found both Clemens' journal and part of the serial referenced and added both to the archives: it's quite a violent tale.

Journal of Father Vincent Clemens
Undated
Original burnt, transcribed, 8.5" x 11"
1/3
Today the responsibilities of my post weight heavy upon me. I must bear these burdens before God for my Congregation, and long have I done it gladly. It is a great honor to lift the burden of Sin from the shoulders of my Constituents and bear that weight to God. But the words spoken to me through the confessional's webbed partition this very morning have not left me, though their content I would absolve before GOd of my own accord. May that I bestowed peace upon the Confessor, for I have found no peace myself.

Though wrong it may be to make record of this confession, brought to me in good Faith and confidence, I hope that in writing this account I may exercise its memory from my own mynd, and relieve the burden of its memory. I shall write these words, and then let the hearth's fire consume them, and be done with them.

It is very dark tonight, and the night is full of inhuman barks and chirps. Though I know them to be the cries of the grey fox that haunts the chicken coop, I cannot help but shiver at every child-like cry.

I stall even now, inwilling to commit the boy's tale to paper. When he first spoke, I supposed him a liar. Now, in the darkness of my chamber, as his words continue to echo within me, I am no longer so sure. Enough! I must begin!

"It was a strange thing," he told me. "And I weren't sure it were real, even as it were happening. You see, Father, my first sin is what work I've taken on. I stoled. Lied and stoled." The boy's language was atrocious, and my transcription does it no justice. No wonder he had fallen in with thieves. Ah but it was God's will perhaps; had he been well spoken he would have been but a well-spoken thief.

I stifled a yawn, as a Man of God must, and patiently bid him continue. I hear confessions of this nature dozens of times a week. THievery, adultery, lies. Men are so predictably monotonous in their expression of weakness. Already, I felt boredom begin to encroach upon my mind.

"Well that Preacher, yeah, one found tied up bloodied outside his church last week? You seen it in the papers?"

Boredom fled. He paused, but I urged him on. I knew the Preacher of whom he spoke - Reverend Jeremy Byrne - and though I cannot say I liked the man, an attack on a Man of God cannot go unpunished.

"Well I weren't there for that, but that was just the first act of the play you might say. I was there for the second. I knew it were wrong, Father, but I do what I'm paid for and last night I was paid for coming along to take that Preacher out to the Bayou."

Take him out to the Bayou. Though I may mis-rememver many of the boy's words, I am certain he uttered those. A euphemism even I know is shorthand for murder.

At this point in the story I must make my own confession. I had not heard such a tale in months! Though I knew many murders were committed in my own Parish weekly, perhaps even daily, most murderers were not the sort to hold council before God. I found myself taken with a most unholy curiosity.

Suddenly, I could feel my blood pumping through my veins as if in a frenzy. It had been some time since I had been to purchase one of the adventure stories sold for a dime at the local general, and I found myself thinking of one of the most recent I had read as I sat there listening, clutching my rosary beads as if my grip could force the story more quickly from the boy's pale white throat.

I asked the boy, then, quite plainly, if he had murdered the man, and he was silent for some time. I grew impatient and demanded he speak.

"I couldn't say, Father. I couldn't rightly say." His tone was thoughtful, and bore no remorse. Oh Rogue! Oh Devil! "The men I was with, they beat Reverend Jeremy fiercely. I hung back, on watch, but I was more watching Mr. Jeremy, Father. And just when I thought he couldn't take none more, he starting screaming. Scripture it were I think, though he sounded like the Devil himself."

I was on the edge of my seat, barely daring to breathe lest I distract the boy from the course of his story. His breath had quickened. The memory clearly disturbed him. I must know more!

"He kept right on screaming, and then there was a light, like fire, and he begun to burn. Didn't see anyone light a match he...he just..."

And that is when that idiot of an altar boy came screaming into the church, having just received the morning paper, saying that Reverend Byrne was missing and two found dead out in the Bayou and had I seen the news?

The boy fled. Though I caught site of his back as he sped through the church doors, I doubt I will see him again.

He wasn't much to look at in his plain black suit, but he was a Man of God and anyone could see it. His faith shone through in his optimistic step, his kindly smile, and his polite manner.

Yet he had a harsh word to say about the local Black Hand Gang and their activities in the city of New Orleans. When he spoke of Charles Matranga, the congregation could feel the heat of his brimstone upon them.

Reverend Jeremiah's harsh words soon reached the ear of the Mayor, who had promised to take action against the Black Hand. The men of the Black Hand were fearsome and violent men, their bellies set on drink and their minds set on gold.

The first threat came by letter. But Jeremiah had no family to hold hostage and the vile threats did not shake him, for he believed that God would protect him. He had the Black Hand's letter published in the newspaper, accompanied by another righteous sermon condemning the criminals and calling for their immediate arrest.

So, men were sent to his home in the night, where they dosed the Reverend with chloroform to keep him quiet, removed his little finger, and clove his tongue in two.

But Jeremiah would not be silenced, and when his tongue was healed he could not be stopped from taking the pulpit once again. "They have tried to make a Devil of me," he hissed at his congregation from across the pages of his Bible, "but only God can make a Devil, and God has not yet sent me from his light."

DON'T MISS NEXT WEEK'S ISSUE, THE LAST STAND OF REVEREND JEREMIAH! In this issue Reverend Jeremiah, the great preacher turned detective and the star of your favorite adventure series, takes on organized crime in the Great City of New Orleans.

The Last Stand of Reverend Jeremiah

The second threat came delivered by hand: six hands of three thugs who dragged Reverend Jeremiah from his bed out to the Bayou in the dead of night.

They wanted him to stop preaching against the Family and against Black Hand. He would never stop preaching he said, though his split tongue slurred the words. They laughed at him and pushed him to his knees.

"Reverend, you have a lot more to lose than your tongue. But our boss isn't a Godless man. And if you promise to stop your slander of his business, to stop your preaching all together, he won't call us out again."

Jeremiah looked off into the distance, as if reading from a page. "But if I say I will not mention his word or speak anymore in his name, his word is in my heart like a fire, a fire shut up in my bones. I am weary of holding it. Indeed I cannot."

He was rewarded for this speech with a blow to the head that sent him face first into the muck. But the Reverend did not despair. He could feel the frenzy of his faith burning within him, like a fire.

"Whenever I speak, I cry out and I proclaim violence and destruction!" The Reverend was shouting now, and the thugs took several steps back. A most unholy light, it seemed, had begun to emanate from his face. The thugs looked at each other nervously, uncertain what to do.

"Let him that STOP ME be DESTROYED like the cities of old that the lord OVERTHREW without MERCY." With those words Jeremiah howled in fury and as his rage consumed him, he burst into flames, consumed by heavenly fire, though no match had been struck. He ran at the biggest of the men, setting his clothes alight and sinking his teeth into the gristly flesh of his neck as he tore at skin and muscle and fat with his teeth.

The screams could be heard for miles.

It truly was a miracle.