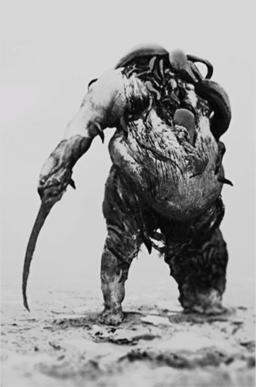 Official game page once gave this description of the meathead:

Researcher's insight into the Meathead

Frankly, I;m not sure why they referred to this thing as a Meathead at all. The creature has no head. It could best be described as a bloated, headless, humanoid monster. More easily cut than shot; a hard hitter, but too well insulated to take much damage from a fist or a blunt object. It appears to have a symbiotic relationship with leeches, though these, too, are not the creatures you might recognize as such. The leeches appear to have acted as the creature's sensory organs, allowing him to see, to find prey, and to weaken that prey with their own poisonous bites. They are a cleaver extension of the creature, advance troops in a way.

Scognamiglio, that fool. He called them Soul Farmers, but I can't see why. He thought they were vampiric essentially, feeding on souls rather than blood. He imagined them walking into towns in the night, harvesting the "souls" of the people. But read just one first-hand description of this creature, and you will understand that it could not just walki into a town to quietly harvest the souls of its inhabitants. It had no eyes, no mouth to feed with, and it barely fit through most doors. It is not a subtle creature. Not in any way, leaving trail of leeches in its wake.

However, I believe I have found documents that Scognamiglio missed, in his single-minded focus on the occult, and I have unearthed a letter from our own r. Huff among the papers of William Salter, almost lost for the carelessness of my colleague!, that may illuminate its origins.

I took as many papers as I could carry from the asylum when I ran. I didn't think about it much at the time. Just wanted to be gone. I could not stand the thought of being confined there again, however much good my first stay might have done me.

For many days I avoided those papers. They are a remainder of unpleasant things. Dark thoughts. My confinement and the masochistic doctors...; However, this morning I felt my strenght returning and as I sipped my chicory, I began to examine the bundle of papers. I intend to find out what is happening in this city, and I hoped there might be mention of the plague or medical speculations as to its origins. I did not expect to find this.

I no longer know what to believe. This is no plague. Strange creatures roam the swamps. And men, perhaps stranger still, hunt them. The birth...;my god. I do not know what to think. The very idea is fantastic. Or it should be. But I have seen the creature of which they speak with my own eyes, seen its enormous, leech-covered body pacing on the shore. The...I can't bring myself to write it...of Hannah Kinney, as told in the letter. Could it be one and the same. I shudder to think.

I must apply myself to my work, and continue to practice and train. If I can find work anywhere, it will be among the men who have dedicated themselves to fighting this thing. I must prepare myself for the worst. ws

I must begin with an apology, as I am obliged to write by a most unpleasant situation. This letter will be of little comfort, but we may yet avoid further suffering.

Perhaps you have already been informed of the death of Mrs. Hannah Kinney and the disappearance of her husband, AHA member Jonathan Kinney. Much has transpired in secret, and to our detriment. The loss of the Kinneys has been a great blow to our morale, a blow no doubt confounded by the emerging reports of a new beast roaming the bayou. The giant bloated carcass, allegedly blind, spews leeches which act as its eyes. What the lower ranks have taken to calling "Meathead." The Kinney's own implication is inexplicable. It is my duty to elaborate it.

You will be aware that for a time, the AHA did not allow the initiation of women, though it is unlikely that you know why we were forced to take this measure. The decision was much to our own detriment, I can assure you, for it was not a lack of skill that kept so large a group from our ranks. However, the horrible events that led to this decision have become of the utmost importance, and I will share the story with you now, believing that it will aid us in solving this difficult problem.

Fortify yourself, form you may find what i have to say sickening.

When our AHA chapter was first founded many, many years ago, there were but few female initiates. Three were initiated, and they thrived as well as any who have chosen to bear such a burden. However, after a time, it was found that one of these initiates was with child. Though we did not know it, this condition in the Initiated is extremely dangerous, perhaps even more so than the creatures and monsters to which we have become accustomed to facing in our work.

After the quickening, the mother began to show great power, more than we had ever seen in a single Hunter. We awaited the birth with trepidation. Toward the end of her term, the mother moved into AHA lodgings and one of our own doctors remained at her side at all times. She did not survive the birth. The child - or better put, demon, for the ritual blood in her veins took human form through the flesh of the foetus - killed 12 Hunters before it was laid to rest. I need not tell you that the scene was gruesome, for the creature had acquired great powers through the body and the breath of the mother. Through this event, we first learned of these gruesome possibilities.

This brings me to the unfortunate fate of the late Mrs. Kinney, and the events of this past month. Mrs. Kinney's husband was a member and, unable to keep a secret from his wife, he told her of our Society and his role in it. Together they performed the initiation ritual. She was the first female hunter to be initiated in many decades, and she disguised herself to avoid detection. However, the pair's considerable skill in the hunt did not escape notice. Together, they rid us of more terrible creatures than most of us will destroy in a lifetime. But in their place, they left something worse.

A close friend of Mr. Kinney's became aware of the couple's secret this November past, after a desperate encounter with an entity of great power. He described Mrs. Kinney to me in a letter as follows:

"I have never seen such vicious displays of power. We feared Hannah would be killed; yet she destroyed the entire hoard herself with a wrath, a fury, and a joy that I fear torecall. I urged Jonathan to inform the Society council of their secret. He refused; I never saw him again."

No human woman could survive the birth of such a child. While in the womb it lends the mother unimaginable power; once born, it seeks only to devour the host. Dr. Henry attended the birrth, and described it to me personally as follows:

"Her eyes glowed, and her skin steamed. A grin appeared frozen upon her face, though her moans and screams spoke only of pain. Even as the creature clawed its way from her body, disgorging leeches and disemboweling the mother-devouring her flesh as it did-she laughed. She laughed! Long after her pulse had stopped she laughed. I shall never forget that sound as long as I live. We should have burned the body. We should have burned the entire building to the ground."

What emerged from the mangled corpse of Mrs. Kinney was already the size of a child of 6 or 7 years old. Yet it bore no head and in its place a mass of leeches writhed.

Dr. Henry fled, and by the time he returned to the lodge with a band of armed hunters, it, and the body of the mother, had gone. I suspect that it devoured the corpse, though perhaps we will see Mrs. Kinney's visage again in the bowels of the swamp, or in the belly of the spider. Who can say?

The AHA stands at a crossroads. A transformation began with the death of Mrs. Kinney, and our actions now will determine the path both the AHA, and Mankind, will be forced to follow. If only the couple had known to use the new serum in their initiation rite. As you know, women are welcome among our ranks today, as the latest serum - the very serum that allows us to walk among the infected and that gifts us with the Sight - also prevents conception. This information should not have been kept from you. It was both unethical and unwise. So much horror could have been avoided.

These circumstances call for a more organized approach than to which we are accustomed. This creature must be destroyed, alongside its brethren. Arm yourselves - I have commisioned special arms, and ammunition, from Henry Caldwell himself for this purpose - and band together. Our enemy grows ever stronger, and we must do the same.

With high respect and esteem,