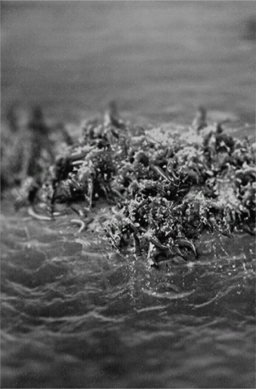 My initial suspicions about the origins of the Water Devil have been refuted absolutely by my latest research. I had thought the thing was related to some species of eel. Even a Gar or a Bowfish would have seemed logical. Or so I thought. But I'm getting ahead of myself. Let me begin with the creature itself, as the hunters knew it.

Though it would be easy to mistake it for one many-tentacled creature, the Water Devil is in fact a swarm of smaller aquatic animals. It seemed to sense the presence of anything entering its home waters, and its movements were quick and decisive. Because of its swarm-like nature, it was hard to kill with bullets or any sort of melee attack, and often the best recourse was simply to run for the shore.

For a long time, the waters of the bayou appeared to have gone silent. The usual wildlife had either fled, or been killed. Or both: it is likely that the creatures devoured whatever wildlife was not quick enough to flee to safer waters, but several populations of alligators clearly survived the infestation. Collins and Scognamiglio seem to agree on this point, as well as on the creatures' appearance, though at the moment, I find all of it a bit fantastic. No wonder, as our main surviving source on the subject of its appearance is a fictionalized version of the tale.

Though the logic (well, the assumed logic) of these creatures' form and function may be twisted and strange, the Water Devil feels outside of that framework, like an experiment gone wrong. I cannot pinpoint its purpose for the larger organism, and I imagine that, for example, a monstrous, ravenous alligator, able to move both in water and on land, would have served its purpose more immediately.

I hope this letter finds you well. I was greatly saddened by the fact that you were not, after all, able to come to New Orleans, but I understand that business must come first. We all have to eat, especially you, you great brute. But my crude jokes aside, I greatly respect what you are trying to accomplish.

Thank you for taking the time to read my latest. I was heartened to hear your positive response. Sadly however, I still cannot find a soul who will publish it. People simply do not believe that what I describe could have possibly have happened to two young women. It seems to me, the people who say these things have not spoken widely with the "weaked" sex. You remember my rejection letter from that damned Tousey? There have only been more of the same. I am beginning to think I will have to rewrite the thing after all. Though for now, I do not feel up to the task. I feel a certain debt to the facts, so for now, I will let the manuscript rest in the drawer of my desk.

But I have not stopped working, and in fact, enclosed you will find a copy of the first published installments! For now anyway, I will have bread and wine. It came to me - or should say he came to me - during an evening spent at Finn's. I can hear you laughing even now, and no, I have not given up any of my vices. I was drawn to the man because of his face, which was scarred almost beyond human recognition, and I stayed at his side until dawn listening to what he had to say. He was as eager to tell the tale as I was to hear it, and I made sure that Sal kept us well in our cups. You may not believe it, but I stayed true to the tale he told of the "many tentacled beast of the swamps," though the scars on his face were the only offer of proof. This town is awash in the strangest tales. I do not regret the move, though I miss you dearly. There is enough inspiration on these streets to fill a thousand novels. You will hardly believe the tale yourself. Do tell me what you think.

His face was scarred and discolored beyond all recognition. He was a Free Man, a Black man, once a slave, but never to be again, for he had armed himself and would fight nail and tooth, would kill and would die, before he ever submitted to such conditions again.

His name was Jonas, and he was fond of his Winfield, like so many before him, and felt himself as powerful as a regiment of men with it in his hands. Should you manage to catch sight of those hands on one of the rare occasions he was without his calf's hide gloves, you would see that they were as soft and as smooth as a porcelain cup. Once, his face must have been the same. But all who had ever seen his face without scars or his hands without gloves were dead, most by his hand, with the exception of the lover he had lost and mourned and whose memory he fought for still.

They had been partners in the Hunt, Jonas and a man called Gator, initiated by an old Preacher who thought them both too desperate for any other work. Correctly, it must be noted, for both felt compelled to wander, to hunt, and to fight. Both avoided the indoors, feeling most at home with a rifle on their backs and the stars above them, ignorant though they were of the fate written there in their name among them.

Though the Preacher who initiated them never did manage to convert them, Jonas and Gator would meet the Devil in the shallows of the Stillwater Bayou, and only one of them would live to regret it.

"Move your drumsticks Beefrat, we don't have a year to get to Bully."

They'd been walking for hours and still hadn't found the bounty they'd been sent to find.

"We're walking in circles Harpo, there ain't no way around it. Around it. Get it? Regular poet, me."

"You would have starved to death a poet. Or a comedian."

"Well I'm going to starve to death a Hunter, aye."

"Dark times when the Sight can't set us right."

These Hunters were rumored to have powers that led them to their quarries - and the rumors were true. A small motion of the hands and a short incantation whispered and the world became a misty grey, their targets a bouquet of blue sparks visible only to those who had been initiated.

But that day, when they moved into the Sight, the landscape was bleak and empty, and they were unable to catch the trail of their quarry, and they were beginning to feel a sickness come upon them. The swamps were silent, and though the distant moans and screams of a Hive punctuated the day, as they always did now, there were no human screams, no gunshots. They thought themselves alone.

Harpo and Beefrat rested upon the shore, clutching their stomachs.

"Might be the flu, Harpo, come for us at last. Haven't felt right since we broke fast. We never should of ate that meat." Somewhere beneath the layers of dirt caking his face was sickly pale white skin, the mouth framed by a straw-brown mustache and beard. The other looked much the same, though his beard was longer, with a touch of red.

"My insides are wailing. And with the Sight off..." he trailed off before finishing his thought, but his meaning was clear: it was an ill omen. He looked down at his shaking hands, where several strange lumps were developing. "I fear the worse, Rat."

The meat they'd had had been wormy and rotten, but they had eaten it all the same. They had drank away the money from their last bounty in a single night and had no money left for good fruit or bread. This bounty might have filled their stomachs with something better.

Meanwhile, from the thicket, Jonas and Gator watched.

They had been tracking the same quarry as Beefrat and Harpo and had planned to eliminate their competition and to loot what weapons they could from the corpses: a double bounty. But now the two men on the shore were acting strange and having removed their hats and coats, were moaning and scratching at their faces and arms.

It was safest to shoot from a distance.

Their aim was true.

Jonas drew his knife down the length of the Harpo's body from chin to pelvis, expecting the spill of organs and the stench of foul rot and death. He intended to take the heart, but he was greeted with a great flow of thick, segmented white worms, spilling from the dead man's flesh.

The worms had already devoured the organs - some still had blood smeared across the mouth cavities, opening and closing in the air as they sought after more flesh. Jumping back, Jonas reached for his rifle and began to shoot, but landed no hits. The stubby, writhing creatures, turning a reddish orange now that they had been freed from the man's carcass, skimmed across the mud and slid into the dark waters of the bayou.

The dead man's partner, Beefrat, had run towards a building on the far side of the water at the first sound of shots. He stopped and began to convulse. The white worms poured out of his mouth, his ears, and the gaping sockets where they had eaten their way through his eyes. His corpse emptied of the foul creatures at last, his body collapsed into the water.

Jonas and Gator stood on the shore, watching, but ready to run. The water began to churn - the worms had swarmed around the corpse to finish off the remaining skin.

Would they stay and fight or would they let the creature go? The men's eyes met and after a gruff nod, they waded out into the water.